Very simply, the color orange is the color that comes between red and yellow on the spectrum of visible light and on the color wheel. In this article we’ll dig into what is orange and how it became a beloved color not only in business, but also as a staple in home decor. Diving deeper into the subject of the color orange, we get a little more scientific. You see, your eyes perceive the color orange when light has a dominant wavelength of 585 to 620 nanometers.

How is Orange Made?

Orange is also color that people associate with friendship, cheerful interactions, amusement, energy and fun. Many brands use orange in their marketing. Think Etsy, the Today Show, Nickelodeon and Payless Shoe Source.

What are the Different Colors of Orange?

At Color Amazing, we offer a wide selection of orange colors in our home decor items, from our own Pumpkin Orange to Peach and Terracotta. There’s also Tropical Orange, Deep Orange and Dark Terracotta. Here are a few standard orange colors with hex codes found in graphic design.

How Many Colors of Orange Exist?

It depends. Really any color that occurs when light has a dominant wavelength of 585 to 620 nanometers. Here is a list of commonly used orange shades and their hex codes and RGB codes. 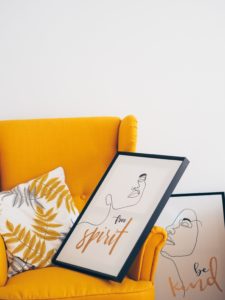 Yes, the orange color name in English comes from the appearance of the ripe orange fruit. The word comes from the Old French: orange, more specifically, pomme d’orange. The French word, in turn, comes from the Italian arancia, based on Arabic nāranj, borrowed from Persian naarang derived from Sanskrit nāraṅga. Before the word orange was introduced to the English-speaking world, saffron already existed in the English language. Before the late 15th century, the color orange existed in Europe, but it was called yellow-red. Portuguese merchants brought the first orange trees to Europe from Asia in the late 15th and early 16th century, along with the Sanskrit naranga, which gradually became part of several European languages: naranja in Spanish, laranja in Portuguese, and orange in English.

What Does Orange Signify? The high visibility of orange made it a popular color for certain kinds of clothing and equipment. During the Second World War, US Navy pilots in the Pacific began to wear orange inflatable life jackets, which could be spotted by search and rescue planes. After the war, these jackets became common on both civilian and naval vessels of all sizes, and on aircraft flown over water. Orange is also widely worn by workers on highways and by cyclists. In this sense, orange signifies caution and work zones. Orange is also prevalent in fall decor. You may not think orange is a good choice for interior paint, but terracotta and peach are popular paint colors. On the traditional color wheel  blue is the complementary color to orange. As many painters of the 19th century discovered, blue and orange reinforce each other. They are a popular combination in home décor color choices too. Terracotta, a variation of orange, pairs well with navy blue. The actual complement of orange is azure – a color that is one quarter of the way between blue and green on the color spectrum. The actual complementary color of true blue is yellow. Orange pigments are largely in the ochre or cadmium families, and absorb mostly greenish-blue light.

The Color Orange in Nature

The orange color of carrots, pumpkins, sweet potatoes, oranges, and many other fruits and vegetables comes from carotenes, a type of photosynthetic pigment. These pigments convert the light energy that the plants absorb from the sun into chemical energy for the plants’ growth. The carotenes themselves take their name from the carrot. Autumn leaves also get their orange color from carotenes. When the weather turns cold and production of green chlorophyll stops, the orange color remains.

In Confucianism, the religion and philosophy of ancient China, orange was the color of transformation. In China and India, the color orange took its name not from the orange fruit, but from saffron, the finest and most expensive dye in Asia. According to Confucianism, existence was governed by the interaction of the male active principle, the yang, and the female passive principle, the yin. Yellow was the color of perfection and nobility; red was the color of happiness and power. Yellow and red were compared to light and fire, spirituality and sensuality, seemingly opposite but really complementary. Out of the interaction between the two came orange, the color of transformation.[31]

A wide variety of colors, ranging from a slightly orange yellow to a deep orange red, all simply called saffron, are closely associated with Hinduism and Buddhism, and are commonly worn by monks and holy men across Asia. In Hinduism, the divinity Krishna is commonly portrayed dressed in yellow or yellow orange. Yellow and saffron are also the colors worn by sadhu, or wandering holy men in India. According to Buddhist scriptures and commentaries, the robe dye is allowed to be obtained from six kinds of substances: roots and tubers, plants, bark, leaves, flowers and fruits.

In Europe and America orange and yellow are the colors most associated with amusement, frivolity and entertainment. In this regard, orange is the exact opposite of its complementary color, blue, the color of calm and reflection. Orange is the color most easily seen in dim light or against the water, making it, particularly the shade known as safety orange, the color of choice for life rafts, life jackets or buoys. Highway temporary signs about construction or detours in the United States are orange, because of its visibility and its association with danger. It is worn by people wanting to be seen, including highway workers and lifeguards. Prisoners are also sometimes dressed in orange clothing to make them easier to see during an escape. The Golden Gate Bridge at the entrance of San Francisco Bay is painted international orange to make it more visible in the fog. Next to red, it is the color most popular for extroverts, and as a symbol of activity. Orange is sometimes used, like red and yellow, as a color warning of possible danger or calling for caution. A skull against an orange background means a toxic substance or poison.

What Colors go with Orange? Orange can be used with a number of different colors. It could form an autumnal palette alongside cream, olive green, reds and browns, or pop next to bold purples. If you want to take down orange’s intensity, pair with white. It can also work well alongside blue, which is its complementary color on the color wheel.